The Nutribullet Rx is Nutribullet’s latest blender offering. It features a more powerful motor than the Nutribullet or the Nutribullet 900 and it adds a heating function for making hot soup. The soup feature is something that people have been asking for, so that addition makes the Rx a rather attractive option. Nutribullet Rx reviews, however, have been a bit mixed because of complaints about the rubber gasket on the blade housing coming loose. There have also been reports of the soup pitcher leaking. Curious about that, I went out an purchased one, even though the last thing I need is yet another blender! So, here is my Nutribullet Rx review. I give it an overall rating of a B. It is a good blender, and I like it better than my 900 model, but it is not without some faults. 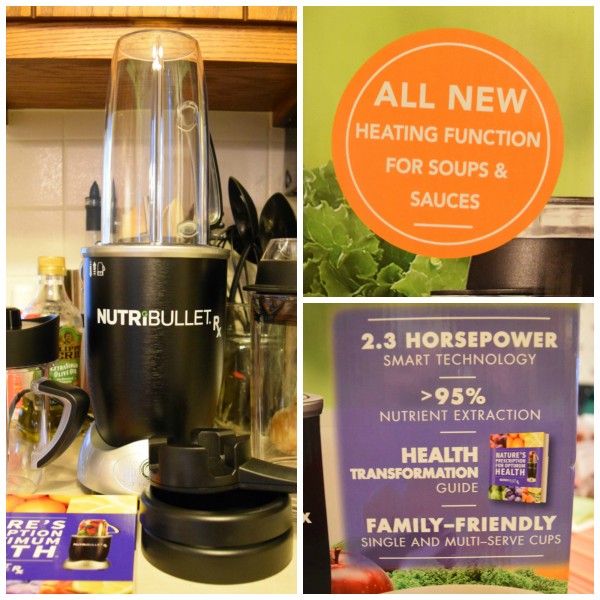 Bring on the Power: The Nutribullet RX Motor

The best feature of the Rx is that it has a 1700 watt motor, which is a significant step up from the 900 model. This allows for excellent blending, especially for greens. No more little chunks of spinach or kale in your smoothies with this baby!  While I have been happy with the performance of the Nutribullet 900 in that regard, the Nutribullet Rx is definitelys a step up. It also takes care of greens better than my Vitazmix. One small complaint though: With the bigger motor, also comes greater noise. I don’t really expect a blender to be quiet, but if you want a bit less racket and don’t intend to make soup, get the 900 instead. Also, if you make soup be prepared to listen to this noisy thing for 7 minutes!

The Nutribullet Rx features some design changes that make blending a bit more efficient. Frozen items do not get stuck in the blades as easily, and it comes with nicely large cup sizes of 30 and 45 ounces (the previous Nutribullet model cups are not compatible with the Rx). The unit crushes ice wonderfully, and it is no surprise that it makes excellent smoothies and pulpy juices. That is what the brand is known for after all. I also found using it that it was a bit more forgiving of accidentally overfilling it. Things would still blend without having to remove the bullet and shake it or tap it get things unstuck from the blades.

Also new is how the unit turns on and off. To turn it on, you simply place the bullet in the motor and it starts automatically.  No more pushing and turning, which is nice since my 900 would sometimes stick doing that. The Rx turns itself off after an appropriate amount of time. If you push the button on the front within the first minute, it goes into heated soup mode. It also does a cool little decrease in motor speed in the middle of the cycle, which helps dislodge anything that might be stuck around the blades. However, the gasket now comes dislodged easier as well, which is a problem, although not an insurmountable one. More on that gasket in a bit.

For many, the biggest and happiest new feature of the Nutribullet Rx is the heating finction and one liter pitcher, which allows you to make hot soup and sauces. I had  previously considered using my Nutribullet 900 for soup and then heating it separately, but even the colossal cup size for that was a bit on the small side, and I already have a Vitamix that I could use for heating (the Vitamix heats by energy emitted from the blades, without a set timer function and it does a pretty good job at it). With the Nutribullet RX, soup is easily done in one step, and the entire unit is much more portable and compact than the Vitamix. Given my love of soup, you can expect to see Nutribullet soup recipes on the site pretty soon.

Soup making is quite simple, but there is a big caution that must be taken. Don’t overfill the pitcher! Like the cups, the pitcher has a max line. I interpreted it to be like the cups, where you can fill the cup quite full and then add liquid to the line. With soup, that overfills it and, as it blends, soup rises up through the lid vent and leaks out all over the sides of the pitcher. I made quite a gooey green mess making my first batch of Nutribullet broccoli soup! Luckily I snapped my photo just before it made a mess! I have read a fair number of Nutribullet Rx reviews that mention leaking when making soup, and I am guessing they had the same issue. The fix, of course, is to be quite conservative when filling the pitcher. Although that in turn makes it hard to get two full bowls of soup out it. Ideally, I think the pitcher needs to be a bit larger for making soup for two people.

By the way, you can also fill it fuller and deal with leaks by wrapping a paper towel around the top. That actually worked very well for me, although it is annoying to have to take that step.

One final note on soup making: Soup in the Nutribullet Rx can come out a bit frothy. Or at least my broccoli soup did. This was likely partially because I put some skim milk in it and all that heating and blending foamed it a bit. It wasn’t unpleasant, but it was a bit unusual! I jokingly referred to it as broccoli latte.

Given the mess I made the first time I made soup, I learned quickly about cleaning the Nutribullet Rx. It really is quite simple. The unit has drain holes, so when you drip green broccoli goo into the base, you can just pour a bit of warm water in there and clean it up. It was very easy! The cups and soup pitcher are dishwasher safe, but the blade unit should be washed by hand and the motor unit should not be submerged in water.

About That Pesky Nutribullet Rx Gasket

Now for the biggest complaint. In general, Nutribullert Rx reviews have been quite positive. Simply take a look at the customer reviews on Kohls or Amazon to get an idea. But one complaint jumps out repeatedly. It seems that a fair number of people have trouble with the gasket on the blade housing coming loose or falling off completely. That in turn causes leaks and performance issues. For some, the gasket came off while blending and got mangled in the blades.

There also is a reported fix that I have mixed thoughts on. The Nutribullet RX comes with a blade removal tool. The instructions are not particularly upfront about the use of it. In fact they never really tell you to use it at all and the instruction discuss hand tightening. But there are reports that those who use it every time have not had gasket problems. OK, that would good, and I like the tool since I used to have problems with my 900 getting stuck on too tight at times. But, I have been using the tool and I too have had the gasket fall off.

I find that the gasket seems to come off most often when blending using frozen fruit. I have never had it fall off while blending, but it has sometimes popped off when I removed the blades, even using the blade removal tool religiously. This hasn’t really been a big deal to me. The gasket sometimes came off with my 900 as well and it isn’t all that hard to pop back on. I have seen some people say that they had difficulties with that, but I haven’t. I think it goes back on very easily and much easier than the 900 one. Now, if it comes off during blending and gets mangled, I will change my view of it, but so far that has not happened to me.

One final note, and another way to prevents this: You can always make smoothies in the soup pitcher and just hand wash the whole thing, leaving the blade unit on. This is what I have taken to doing simply because I never use the Nutribullet cups as drinking cups and I can just leave the whole thing on my counter like a normal blender that way. So for me, that soup pitcher is a big bonus when it comes to making smoothies!

Overall, the Nutribullet Rx is a step up from the Nutribullet 900 Pro. The larger motor is awesome, and the ability to make soup is a welcome addition. However, it can leak out the top when making soup and the gasket can come dislodged. If Nutribullet would alter the design to include a bit larger soup pitcher and figure out how to fix the gasket issue, I would give it an A, but because of those two problems, I rate it a B. That said, I would rate my Vitamix the same and I like the Rx better than the 900.  So if you are trying to decide between Nutribullet v Nutribullet Rx, I recommend the Rx. When it comes to Nutribullet v. Vitamix, it gets tougher to choose. I’ll write a whole post up on that one soon!

You can buy the Nutribullet Rx at Kohls or Amazon, plus quite a few other department stores and big box stores carry it. I picked mine up in person at Target.

GET OUR RECIPES BY EMAIL

Get Our Recipes By Email

This site is not sponsored or endorsed by Nutribullet or its parent company. We are a fully independent site that provides recipes for those who own a Nutribullet or similar blender.

Recipes on this site are largely outsourced or are user submitted. Please consult with your doctor or professional before embarking on a diet program using our recipes.  We do not intend to provide professional medical or nutritional advice.